This is a word cloud of part of my short-story Contraband (as was - I'm pretty sure I'm changing it again. I will get it the way I want!)
'S nice.

Email ThisBlogThis!Share to TwitterShare to FacebookShare to Pinterest
Labels: stuff

Not as deaf as I thought...

Got this from erastes - apparently I'm in my twenties as far as hearing goes. Not bad considering I'm in my mid-thrities and have been abusing my eardrums with loud music since I was about ten!

It was a great experience and seeing Edinburgh by night was interesting, but my God, it was cold! Once we got to 03:00hrs we had our space blankets wrapped around us, which looked very fetching with the see-through macs we were given in case it rained. Lovely!
I had 3 hours sleep vs 36 awake, and I still haven't quite caught up. I'm working on that. Hope to be caught up by Friday, something the dogs are waiting for with bated breath. They've found it very disappointing over the last couple of days to have my alarm go off at 05:30 and for me to then turn over and go back to sleep for an hour. Ah well. Their ungodly hour of the morning walk will come. On Friday. Probably.
Posted by Merry at 13:57 3 comments:

It's DONE! The second draft of 3's Company is finished and is now put to one side for a few weeks while I work on Contraband as was.

I'm going home now as I'm doing the Playtex Moonwalk in Edinburgh tomorrow night and I'll need my rest. I also still have to decorate my bra! Not that I've left it late or anything!
Posted by Merry at 15:25 2 comments:

I am pleased! I've got the afternoon off today (worked late last night, last late night this term) and I'll be supervising the putting up of shelves later; but hopefully I'll be able to put this to bed tonight as I've got the house to myself until about 22:30hrs.

This is only for me, but I like the picture and wanted and excuse to use it! (Thanks to Rachel Caine for the pic! 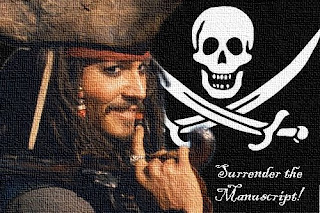 halspacejock- author of the Hal Spacejock series - is giving away a free download of book one: Hal Spacejock. You can download it here

Merry
I write cross-genre - everything from paranormals to futuristics and most things in between - and I love a HEA unless it's horror. NB: Avatar is by John Jude Palencar (http://www.johnjudepalencar.com/) via a free download from tor.com